Where Oil Comes From!

As the Jack in the Box Bunch clean up the restaurant, Small Fry observes there have been fewer cars in the drive-thru lately. Jack the Clown says it's because "people are being smart and saving gasoline" due to the energy shortage. Small Fry adds that he learned in school that the country is running low on oil, which is why they need to conserve energy. Confused, Onion Ring Thing asks why people are saving gas if there's an oil shortage. Jack explains that gasoline comes from oil as the gang steps out of the restaurant.

Secret Sauce Agent and Hamburgermeister hear a horse. Uncle Trillby pulls up to the restaurant in a horse and wagon and greets the gang. When asked about the horse, Trillby explains he's saving gasoline. Onion Ring Thing and Hamburgermeister confront him and ask where oil comes from. Trillby explains that it comes from the ground and asks whether they'd ever seen an oil well. Onion Ring Thing quips "No, and I never saw one sick either! Hoo, hoo!" and Hamburgermeister remarks "Dat's a old joke that he just made up!" Uncle Trillby invites the gang to see an oil well on his ranch.

At the ranch, the gang are observes an oil well. Small Fry asks how oil got in the ground. Uncle Trillby sings a song that explains where oil comes from. He says the oil's been in the ground for millions of years, and Jack adds "if we don't waste it, it can last for many more years!" Secret Sauce Agent, hiding behind a rock, goads Hamburgermeister into coming up with another one of his "famous sayings." Hamburgermeister thinks for a moment and remarks "Well how about 'oil's well 'dat ends well!'" Small Fry rolls his eyes. 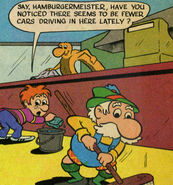 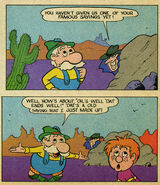 Making up a famous old saying.