The Ultimate Cheeseburger is a signature cheeseburger sold at Jack in the Box.

It consists of two beef patties with American and Swiss-style cheeses, ketchup, mustard, and Mayo-Onion sauce on a sesame seed bun.[1]

In 2002, ketchup, mustard, and Mayo-Onion sauce replaced mayonnaise, and the number of styles of cheese went from three to two, much to the chagrin of Ultimate Cheeseburger purists.[2][3]

A wildly popular commercial featured the mock boy band The Meaty Cheesy Boys singing a song about the Ultimate Cheeseburger, which they later performed at the 1999 Billboard Music Awards.[6]

Foodpixer comparison of a promotional image with the real thing. 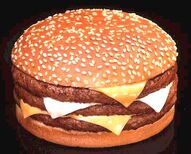 An Ultimate Cheeseburger in its wrapper. 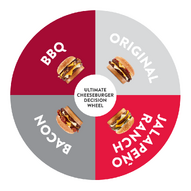