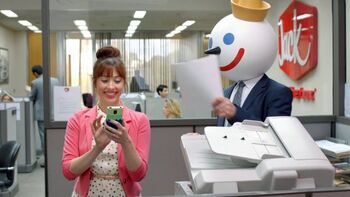 Social Media[1] is a 2013 Jack in the Box commercial advertising the Chipotle Chicken Club Combo.

A young female intern peruses her smartphone as she walks through the halls of the Jack in the Box offices. She notices Jack Box by a copier and informs him the Chipotle Chicken Club Combo is "craze-amaze" and that chipotle is "totes" trending, shoving her phone into Jack's face so he can see for himself. She details the combo meal, describing it as chipot-cray, and declares chipotle to be her "hashtag FaveFlave" (the text "#FaveFlave" appears onscreen) as she takes a selfie with Jack. Nonplussed, Jack says "Let me guess, you're the new Social Media Intern." When she responds in the affirmative, he hands her some papers and asks her to make some copies, as he's late for a meeting. She pushes a button on the copier and looks at it apprehensively, asking "with a tanning bed...?"

Social Media had a corresponding radio advertisement featuring Jack and the Social Media Intern, which Jack prefaces with "We don't pay our interns, but we do let them talk on the radio."[3]