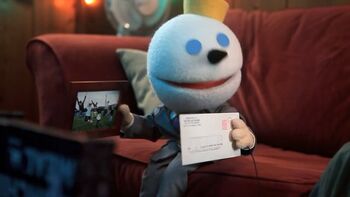 So Much Stuff is a 2013 Jack in the Box commercial advertising Jack's Munchie Meal.

"Puppet Jack" - a small, felt puppet version of Jack Box - is sitting with a young man wearing a green hoodie in front of two Munchie Meals. The man is in disbelief after learning that a Munchie Meal with "all this" only costs six bucks. Puppet Jack explains they're his new late night Munchie Meals with one of four entrees, as footage of the meals plays. The man says he got an Exploding Cheesy Chicken Sandwich, while Puppet Jack says he got a Stacked Grilled Cheese Burger. The man continues, saying he also got two tacos, "Halfsie fries," and a drink, to which Puppet Jack says they all come with those. The man picks up a remote, and shows it off to Puppet Jack, apparently thinking it came with the meal. Puppet Jack says his came with a picture of the man's family and his electric bill. The man, in a serious tone, tells him he can keep that.