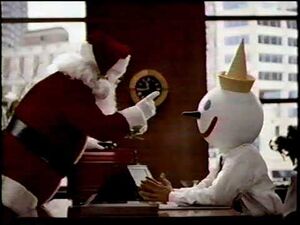 An irate Santa Claus bursts into Jack Box's office and walks up to his desk, demanding to talk with him. A harried female assistant insists she tried to stop him. Jack looks up from a newspaper and nonchalantly asks, "What's up, Santa?" Santa explains it's his new burger. "Huge, isn't it?" replies Jack. B-roll footage of the burger plays as Jack describes it, proclaiming it his biggest burger. Santa says he bought one burger - "one!" he emphasizes - for forty elves, "and they're so full we're already behind schedule!"

The commercial cuts away to a male elf sitting on the floor of Santa's workshop, who rubs his bulging stomach and says "oh yeah." The lower half of a female elf can be seen sitting on a trunk clutching a milkshake with her legs.

Santa begins to leave Jack's office, warning him that his biggest burger could jeopardize Christmas.

In a white void, a bag labeled with the name of the burger falls from above (in Jack's Biggest Texas Burger and Jack's Biggest Burger versions, it's an extra-large bag that's bigger than the frame; in the Bacon Ultimate Cheeseburger version it's a normal-sized bag that crashes through the surface), followed by a bag with the Jack in the Box logo.

Jack yells down the hallway from his doorway, "that burger was never meant for elves!"