The Jumbo Jack is Jack in the Box's flagship hamburger. It consists of a "jumbo" beef patty topped with lettuce, tomato, pickles, chopped onions, Mayo-Onion sauce and ketchup on a sesame seed bun.[1] According to the company, it was named Jumbo Jack because "it was considered one of the largest burgers in the fast-food industry when it was introduced in 1971."[2] Its name might also be a pun on "Jumping Jack."

The Jumbo Jack featured Jack's Secret Sauce until May 1999, when the condiment was replaced by ketchup.[2] 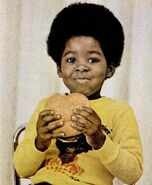 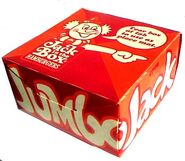 Jumbo Jack box folded out into a place mat.