Leader of the Jack in the Box Bunch

He is depicted as a teenager or young adult clown with Caucasian skin, a white head, green hair, a loose white shirt and a large rainbow collar. His white face appears to be a permanent feature and not makeup, as he was seen going to bed with it still on. Jack's wealthy Uncle Trillby is not depicted as a clown, a possible indication that his clownish appearance is not hereditary as it is in the later Jack in the Box Universe.

Jack the Clown is seen working at Jack in the Box in something of a supervisor role, but it is unclear what his role in the company's corporate structure is.

As the "straight man" of the Jack in the Box Bunch, Jack the Clown has little personality to speak of. He is intelligent and friendly. 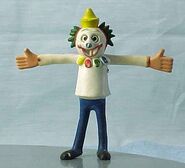 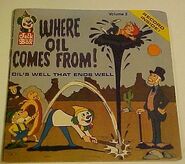 Jack striking oil on the cover of Where Oil Comes From!

Jack as seen on Jack in the Box packaging.

A "chibi" version of Jack. 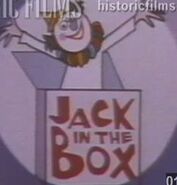 A screenshot of Jack from How A House Makes Noise

A screenshot of Jack from How A House Makes Noise 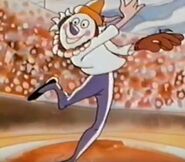 A screenshot of Jack from the baseball commercial on Youtube
Community content is available under CC-BY-SA unless otherwise noted.
Advertisement