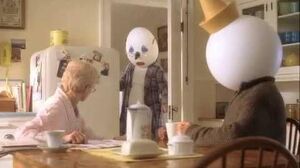 Jack Visits is a 2010 Jack in the Box commerical.

Jack Box admires his mother clipping coupons. "Well, it all adds up," she says. In honor of her thriftiness, Jack declares he'll serve two croissant sandwiches for just $3. His mother tells him he's such a good son and that she's glad he dropped by. "I love coming home, Mom," he replies. Their moment is interrupted by Jack's father, who enters the room and worryingly asks his wife to call the doctor. He glances down at his crotch, which is blocked from the audience's view by a coffee pot, and says "it's been more than four hours." He then notices Jack and says hi. Jack turns to his mother with a perturbed expression and says, "I gotta go."