Jack in the Box Wiki
Register
Don't have an account?
Sign In
Advertisement
in: Universes, Jack Box Universe 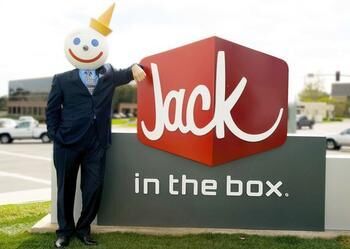 According to the initial "Jack's Back" commercial, Jack Box was "fired" in the 1980s (thereby retconning those earlier commercials into the Jack Box Universe) and regained his "rightful place" as CEO in 1994. Because of this flashback, it could be argued that the universe actually goes all the way back to 1980 rather than 1994.

It is not known how aging works in the Jack in the Box Universe. For example, Jack, Jr. does not appear to have aged since his introduction in the late 1990s.

Similarly, Jack Box would have to be around 80 years old if he were old enough to found Jack in the Box in 1951. This conflicts with flashbacks of him in the 1970s. It is possible the fictional version of Jack in the Box was founded much later than the real-world version.

The list is incomplete. You can help by expanding it.