Hang in there Jack was a month-long ad campaign featuring Jack Box being hit by a bus and his subsequent recovery. The campaign was comprised of TV commercials, social media posts, and online-exclusive videos.

The campaign kicked off on February 1, 2009 with a Super Bowl commercial showing Jack being struck by a bus outside his corporate office. Along with his second in command, Phil, he was walking down the street, stating that he wants the public to know about the fact that the public can order anything on his menu, anytime. He states "For instance, breakfast all day, or maybe a burg-." At that moment, a bus is seen to strike Jack head on, as onlookers cringe and his hat knocked off. The ad ends with Jack lying on the ground badly injured while the paramedics are being summoned. Viewers were then directed to visit the website hangintherejack.com to check on his condition.[1]

Following the accident, Jack in the Box spokesman Brian Luscomb held a brief press conference, urging people to visit a Jack in the Box in lieu of sending flowers.[4] Phil became acting CEO of the company, and issued a rambling video statement in which he appears agitated and issues vague directives to employees.[5]

The next TV commercial showed Jack being checked into the hospital and being operated on as his heart stopped, as Dr. Robert Conley was talking about the a "midnight breakfast at Jack's" with Nurse O'Brien. It is also revealed that his head did not fit into the CAT scan machine and that the doctors were using unprofessional equipment (Dr. Conley states at the end of the ad to give him a hot glue gun and a bonesaw).[6]

Dr. Conley later clarified that it was a "medical hot glue gun," not the type one would use to construct a birdhouse (although he had used it on one), and stressed that he knew what he was doing.[7]

Nurse O'Brien apologized to Jack and his family for ramming his nose into the CAT scan machine, which she blamed on his "freakishly"-sized head. [8]

The third commercial revealed Jack was in a coma, with Dr. Conley stating "he might not make it." Phil volunteered to take Jack's place at the company's head and honor his memory, despite being reminded Jack isn't dead. Jack's loyal assistant, Barbara, is more positive about the situation, stating that Jack will recover. She mentions Jack's "breakfast all day" plan, which Phil doesn't remember.[9]

In an emotional video interview, she expressed disbelief that a man "as strong, and gifted, and brilliant, and firm as Jack" would step in front of a bus, calling it "something Phil would do."[10]

A webcam was set up in Jack's room so people could monitor his condition.[11]

Around this point, the online videos began to take on a more accusatory tone. Jack's anesthesiologist noted that anesthesia can sometimes cause a patient to go into a coma, then claimed he wasn't responsible for putting Jack in a coma.[12] When an interviewer asked Phil if he pushed Jack, he responded with "that's a terrible thing to say" and left the room.[13]

Dr. Conley had some good news to report: his son's lacrosse team had just won their sectionals.[14]

Phil ominously claimed he had big plans for Jack in the Box, and wasn't going to let Jack's coma "get in the way of progress."[15]

The fourth and final commercial showed Phil announcing, after snapping his fingers, that he was going to take over Jack In the Box. Jack, regaining awareness of his surrounding (albeit only listening and blurred vision), thinks to himself that Phil using most of his ideas is a good thing. However, Phil states that he intends to change the company name, to "Phil in the Box", going as far to hold up the future company logo. At that moment, Jack woke up and began throttling Phil, stating that he will not let the name change occur, and stating that he has work to do, all the while demanding his pants. The words "Jack's Back" appear on the screen.

Jack appeared at a company press conference the following day, where he promised to buy everyone new cars, before recanting and claiming it was the medication talking.[16]

Shortly after the announcement, he announced plans to introduce a newer, more modern logo, along with a redesigned website.[17]

Jack immediately after the accident. 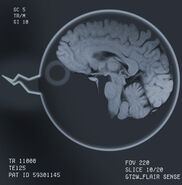 An x-ray of Jack's head.

Add a photo to this gallery

Retrieved from "https://jackinthebox.fandom.com/wiki/Hang_in_there_Jack?oldid=6565"
Community content is available under CC-BY-SA unless otherwise noted.