Jack in the Box Wiki
Register
Don't have an account?
Sign In
Advertisement
in: Real people, Actors 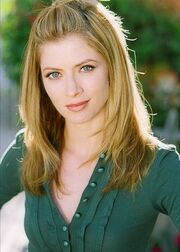 Vigman was born in Holmdel, New Jersey. She started her professional comedy career in Chicago working for The Second City, touring with The Second City National Touring Company in 2000, to launch its 20th anniversary S season.

Vigman first appeared on MADtv in the eighth episode of the eight season in a sketch called "The Real Bachelor." She later officially joined the cast of MADtv in 2003 as a feature performer for the ninth season.

She made appearances on several television shows like I Love the '90s, Scrubs, World Cup Comedy and Cupid before starring in the ABC comedy Sons & Daughters, playing the role of Liz Walker. After Sons & Daughters, Vigman appeared on a number of hit shows including According to Jim, Parks and Recreation, and New Girl, before landing the recurring part of Jill Werner on Suburgatory in 2011.

Her film credits include The Hangover series, The 40-Year-Old Virgin, After the Sunset, Dragonfly, and Love 101.

In addition, she has been in various commercials, including Hanes, Jack in the Box, Chase, Swiffer, Splenda, Esurance, 1-800 Contacts, DirectTV, United Airlines, Rooms to Go, Buick, Real California Milk, and Progressive Insurance.