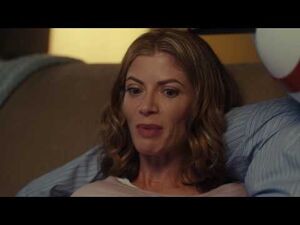 Cricket's Cravings is a 2016 Jack in the Box commercial for the all-day Brunchfast menu.

A pajama-clad Jack Box addresses a group of his employees, who are also in their sleepwear, late at night. Jack says he called them because he just an idea: brunch, all day, everyday. The group agrees that it's a good idea, and a male employee asks Jack where he got the idea. Jack begins to explain: "Well..."

Fifteen minutes ago at Jack's house, Jack is sitting on the couch with his visibly pregnant wife Cricket, who rubs her belly and says "we're" craving crispy chicken and fried egg with bacon, "like brunch!" Jack gently protests that it's 8pm on a Tuesday. Cricket openly wonders if her mother would like to stay with them. Jack makes a shocked expression (his mouth has vanished) as a dramatic music string plays.

Back at the office, Jacks rubs his hands and asks, "Should we get started? Who wants coffee?"

Narrating as B-roll footage of the food plays, Jack invites the viewer to try his new Brunchfast menu, highlighting the Brunch Burger and the crispy Bacon & Egg Chicken Sandwich.