The Cluck Sandwich is a chicken sandwich served at Jack in the Box. It consists of 100% all white meat chicken fillet, topped with crinkle cut pickles and Mystery Sauce on a brioche bun.[1] It debuted in December 2020[2] and "upgraded" in September 2021.[3]

Other chicken sandwiches bow to the Cluck. Our new 100% all white meat chicken fillet is bigger, crispier and better than ever, topped with thick crinkle cut pickles and our signature Mystery Sauce on a toasty brioche bun. It’s so good, it’ll have you doing your best chicken dance.[1] 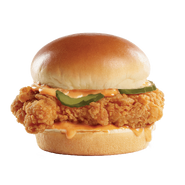 An ad for the Cluck Sandwich Combo.