Jack in the Box Wiki
Register
Don't have an account?
Sign In
Advertisement
in: Jack Box Universe

The Carnivores were an XFL football team owned by Jack Box and featured in a series of Jack in the Box commercials in 2001. Jack said he purchased the team in 2001 after "all [his] CEO friends started buying sports franchises and it sounded like fun."[1] The initial commercial focused on Jack in the Box's breakfast menu, while later commercials advertised the Triple Ultimate Cheeseburger and encouraged viewers to "eat like a Carnivore."

The team played against teams such as the Tofu Eaters and the Vegans. Before Jack's purchase of the team, they had an all-male cheerleader squad.

A series of commercials would showcase a "Play of the Day" in which the Carnivores would win against the opponents using comical, underhanded tactics such as tackling an opponent with the Carnivores blimp or distracting the referees with cheerleaders. 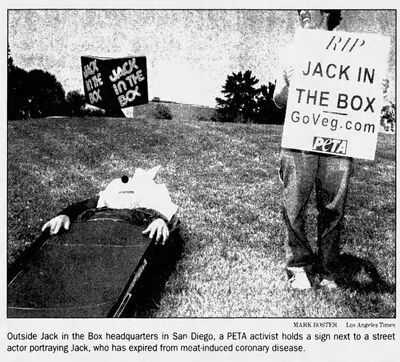 PETA activists staged a small protest outside Jack in the Box headquarters in San Diego, "enraged by the new television commercial portraying vegetarians as wimpy opponents of the Carnivores."[2] The protest featured a depiction of Jack in a coffin, said to have died of heart disease.[2]